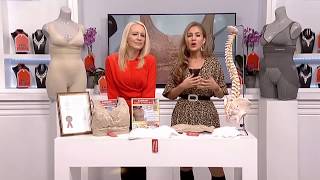 How to Chose the Right Bra for You?

Oksana Mazourik introduces the Bra that Does it All! For the first time ever (in the history of bras) a New Bra invention has been created! One that gives better posture using the natural weight of your breasts! Have you already tried this revolutionary Bra technology by SANKOM? It is the first wire-free bra that gives better alignment, helps with back pain, gives a push-up effect and is comfortable to wear! Take this easy step towards improving your health and feel the insta

Whether it is film, production or TV hosting; Oksana has always been fond of all forms of media communication. Oksana’s new Documentary film production aims to combine both education and comedy together. Locarno Film Festival is one of the oldest film festivals and screens a wide variety of films (short-form, feature and documentaries) – making it the perfect place to share the news of the upcoming release. In an interview Oksana explains how, “the best way to learn is throug